Many times when vegetarians think of a cutlet, they think of a mock frozen cutlet made from textured vegetable protein or another combo of highly processed ingredients. However, thanks to Isa Chandra Moscowitz and Terry Hope Romero’s Veganomicon, you can quickly make delicious cutlets highly from whole ingredients that are satisfying, hearty, and tasty!

In the book, the recipe is actually for Chickpea Cutlets. I did not have any chickpeas prepared, but I did have some black eyed peas on hand. So, I tried the recipe with these beans, and I thought they tasted great. I’ve also made these cutlets with black beans and gotten similarly tasty results. Eventually though I will make them with chickpeas!

You start by mashing the beans in a large bowl with olive oil until no whole beans are left. As you can see in the photo, I missed a bean or two. This won’t hurt the cutlets in terms of flavor but you’ll want the beans to be at least 99% mashed or else you’ll have problems shaping. You then add the rest of the main foundation: vital wheat gluten (used to make seitan) and bread crumbs. I never buy pre-made bread crumbs, but rather lightly toast one or two slices of bread, and then run them through the blender or mini food processor. Instant crumbs! You then finish up by adding minced garlic, water, soy sauce (I used Bragg’s liquid aminos), dried thyme, paprika, and dried rubbed sage. The book also calls for lemon zest, but I didn’t have a lemon and so left this out; the result was still tasty. You then combine the ingredients by folding a bit, then kneading for a few minutes until gluten threads form and the dough becomes kind of stretchy and pliable – basically, it shouldn’t be falling apart when you fold it over to knead.

Once you’re done kneading, you divide the dough into four equal parts, then pat each part into a flat, rectangular cutlet. It’s stretchy so don’t be afraid to really flatten and pull it out! You can always reshape the cutlet if it tears. You then lay the cutlets on a lightly oiled baking sheet, spray the tops with a little more oil, then bake at 375 F for twenty minutes. After 20 minutes, you flip the cutlets and bake for 8-10 minutes more. Wammy! Four tasty bean cutlets made in under an hour, and which freeze really well for future dinners!

With so much baking time, it is really easy to prepare sides while these cook, meaning your whole meal can be ready in under an hour. To start, I placed an ear of corn in the oven with the cutlets after about five minutes of the first round of cutlet cooking, so that the corn could roast for about twenty-five minutes. However, no cutlet dinner is complete without a side of greens! I decided to cook up some more dandelion greens, along with some baby portobellos for added heartiness. Lots of vegetables in this dinner – never a bad thing!

To prepare this side, I filled a skillet with about an inch of water and heated it on high, bringing the water to a rolling boil. I then added the greens and mushrooms, along with a teaspoon of liquid smoke to give it a nice smoky flavor (you may want to add more if you want it to taste really smoky). The veggies all quickly reduced in about five minutes, so you can cook this during the second round of cutlet baking.

When drained and ready to serve, you can add some seasonings to the greens and mushrooms. Salt and pepper works well, and I used seasoning salt, which added a nice multitude of flavors. I only gave it a few shakes though, so the spices wouldn’t overpower the veggies.

This is a nice Southern-style meal that’s hearty without gorging one’s stomach. It’s perfect for an outdoor summer dinner, or even in your livingroom! In the past I’ve also served these cutlets with mashed cauliflower, which makes for a great combo; and they also go well in a big sandwich with ketchup, mustard, tomato, and greens. Definitely give them a try! 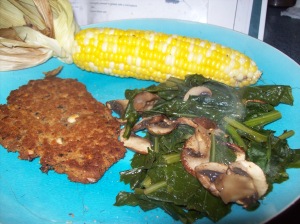 Steamy greens fresh off the skillet!